Markets are understandably focused on inflation and the increasingly tough monetary response. After another round of rate hikes and hawkish signals from advanced economy central bankers, this is looking to be the most aggressive cycle of monetary tightening since Paul Volcker was on the warpath in the early 1980s.

But the financial world’s focus on a generational surge in inflation in advanced economies is stealing attention from a generational slowdown in China that is arguably of much greater importance for the long-term global outlook.

Bad, with worse to come

Recent Chinese economic data have been dismal. August’s retail sales numbers were only reported as broadly encouraging because of a pick-up in the year-on-year growth rate. But this was due entirely to base effects. In month-on-month terms, sales fell. (See Chart 1.)

Consumption is likely to be even weaker in September. Virus disruptions intensified at the start of the month, with many cities entering new lockdowns. Spending on high-contact services such as retail and leisure will have suffered as a result. And while there are tentative signs that the worst of the recent COVID wave has passed – nationwide infection numbers have fallen from a peak of 3,500 in mid-August to below 1,000 at the time of writing – intra-province travel restrictions will remain in place until the end of October. This covers the ‘Golden Week’ National Holiday in the first week of October and will limit the scope for an immediate rebound in spending as the wave of infections subsides.

The news from the production side of the economy is not much better. Last week, Korea published data on exports for the first twenty days of September. These provide the first sight of global trade for the month, and the message was ominous. While exports to the US picked up, those to China fell. This may be a sign that global demand for the consumer goods that China produces – and to which Korea provides inputs earlier in the production chain – is softening. (See Chart 2.)

We recently lowered our forecast for this year’s officially-reported GDP growth rate to 3% from 4% – the government’s 5.5% target set in March has been quietly abandoned – but in reality don’t expect the Chinese economy to grow at all.

The conventional response in Beijing to such weakness would be to loosen policy. But the past week has again revealed the constraints under which policymakers in China are operating.

In the face of a surging dollar, the People’s Bank of China is battling to prevent the renminbi from going much beyond 7/$. Today it announced a hike to the reserve ratio for currency forwards, a move to deter speculation against the renminbi. The central bank has also been pushing back by setting the mid-point of the currency’s trading band at an unusually large mark-up to the spot. (See Chart 3.) There’s nothing sacrosanct about 7/$, but it’s the line in the sand that policymakers appear to have drawn amid concerns that an overt weakening of the currency could encourage capital outflows, which would in turn risk destabilising the domestic financial system.

Another, more fundamental, concern for the central bank – and another constraint on policy easing – surrounds financial stability in the context of ongoing strains in the property market.  I wrote about these in a recent note, but the underlying concern for policymakers is that another round of credit easing would risk reinflating the property bubble and exacerbating moral hazard by bailing out over-leveraged developers struggling in an industry in fundamental decline.

The upshot is that policy easing so far has been limited to measures such as a small 10bp reduction in lending rates and an increase in special funds for banks to lend to corporates at preferential rates. These are modest steps which won’t move the dial at a macro level.

No catalyst for change

All of this is taking place against the backdrop of preparations for the 20th Party Congress next month. Quiet optimism is building in some parts of the analyst community that the Congress –a quinquennial gathering of the top leadership at which Xi Jinping is expected to be appointed General Secretary for an unprecedented third term – could provide the catalyst for a change in policy.

One argument is that its successful conclusion removes a political overhang that would clear the way for China to soften its zero-COVID strategy. Another sees the aftermath of the Congress providing an opportunity for broader measures to support growth and address some of the structural problems that have cast a cloud over the economy’s medium-term outlook.

A forthcoming piece from my colleagues on the China Economics team will go into more detail, but suffice it to say that we’re sceptical that it will prove a watershed moment for the economy. Indeed, if anything, the direction of travel is away from the measures needed to reinvigorate growth.

We’ve been warning for years why we thought the consensus for ongoing, robust Chinese economic growth was wrong, and how the economy would be growing at just 2% by the end of this decade. Although we’ve also explained why China’s structural slowdown needn’t sink the global economy – its reputation as the key driver of world economic growth has been overblown – there are risks around that view.

After a decades-long run of giddying expansion, mounting evidence of bad economic news from China reflects a structural slowdown that’s now in full train. Investors can be forgiven for having more immediate concerns on their mind, but they should be paying attention. 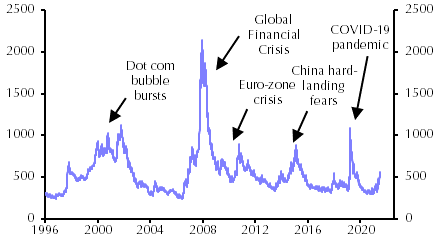 Despite renewed falls in equity markets and broadening signs that investors are bracing for a major slowdown in the global economy, most central banks appear determined to press ahead with the most... 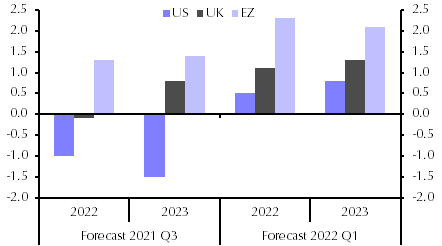 There is still likely to be a reckoning for offices

We think the recent upturn in office market performance is largely down to the one-off release of pent-up demand and remain downbeat about future prospects. With occupancy still languishing and remote...

Euro-zone policymakers have found a bit more money down the back of the sofa to buy another sticking plaster for Greece. But the relatively easy options are running out fast.

Drop-In: US vs euro-zone – A tale of two inflation cycles