A debate is raging among market participants about whether inflation has accelerated to such an extent that a recession has now become necessary in order to bring it back down.

As we explained in a piece published last week, the answer depends to a large extent on how much of the rise in inflation has been driven by factors such as surging global commodity prices or pandemic-induced shifts in consumption patterns that should ultimately fade, and how much has been driven by more fundamental cyclical pressures. This in turn determines the extent to which central banks must now bear down on aggregate demand – and thus GDP – in order to get inflation back under control. The degree to which inflation expectations have shifted also matters.

Viewed this way there are three possible reasons why central banks are raising or moving to raise rates – with different implications for recession risks. The first is that there is no excess demand in the economy (or in the jargon, no positive output gap), but the economy has nonetheless returned to full employment and so interest rates need to be raised to a neutral level. In this scenario, the central bank just needs to bring actual GDP growth back in line with potential GDP growth in order to get inflation back to target – there is no need for a recession.

The second reason for raising rates is that excess demand and a positive output gap have emerged or are on course to emerge, meaning that the central bank needs to bring GDP growth to below potential for a while in order to cool price pressures. This would require it to raise interest rates above their neutral level. Just how far interest rates need to rise – and growth needs to slow – will depend on the current extent of overheating and how aggregate demand is likely to evolve relative to aggregate supply. But, in theory at least, all of this could be achieved through a period of low but positive GDP growth rather than an outright recession.

The problem is that fine-tuning these things is difficult. Contrary to popular belief, there have been plenty of instances where interest rates have been increased without causing recessions. But the current terrain is particularly difficult for central banks to navigate. Among other things, they need to assess the extent to which the pandemic has caused supply-side scarring of economies, the degree to which households will dip into accumulated savings to sustain spending in the face of a real income squeeze, and how quantitative tightening will affect financial conditions. The path to a soft-landing for central banks in this second group is narrow.

The third reason for raising interest rates is that there is no positive output gap, but a series of price shocks has meant that inflation expectations have become dislodged. The central bank therefore needs to bring GDP growth to below potential for a while to bring inflation expectations back down. This is akin to the “Volcker Shock” administered in the early 1980s. The extent to which interest rates need to be raised – and GDP growth needs to be curtailed – will depend on the degree to which expectations have become dislodged. But a recession is significantly more likely in this scenario given that the economy isn’t starting from as strong a position as in the second scenario.

At this point, we would place the euro-zone in the first group. Cyclical price pressures appear lower than in other regions, and we think that inflation can be tamed just by bringing interest rates back to neutral. In contrast, we would put the US in the second group. Wage growth is stronger and underlying price pressures are greater. In our view, the Fed will therefore need to raise interest rates to above their neutral level in order to bring inflation to heel. With that said, a recession may still not be necessary –GDP growth may instead be required to run at around 1%, rather than its potential rate of around 2%, for a year or so. The UK probably sits in the second group too, but the picture is complicated by uncertainty over the extent of labour supply damage caused by a combination of the pandemic and Brexit.

Accordingly, from the perspective of purely getting on top of inflation, it is still possible to believe that recessions can be avoided – although in the US, it will require the Fed to successfully fine-tune policy. In the circumstance, that could be a tough ask.

The odds of a recession would, however, increase substantially if we started to see evidence that inflation expectations were beginning to shift and economies were moving into the third group set out above. The good news is that structural reforms in the 1980s and 1990s have made it harder for high inflation to become embedded in the system. But the longer that inflation stays high against the backdrop of a tight labour market, the greater the chance of a price-wage spiral that causes inflation to become engrained. If this plays out today, then central banks will probably need to repeat the Volcker Shock and engineer a recession in order to bring inflation and inflation expectations back down.

For now, though, the more immediate question is not whether a recession is required to get on top of inflation, but whether the rise in inflation will itself deliver a recession. The surge in prices over the past year has eaten into real incomes across advanced economies. But the squeeze has been particularly intense in Europe, where nominal income growth through the pandemic has been substantially weaker than in the US. (See Chart.) 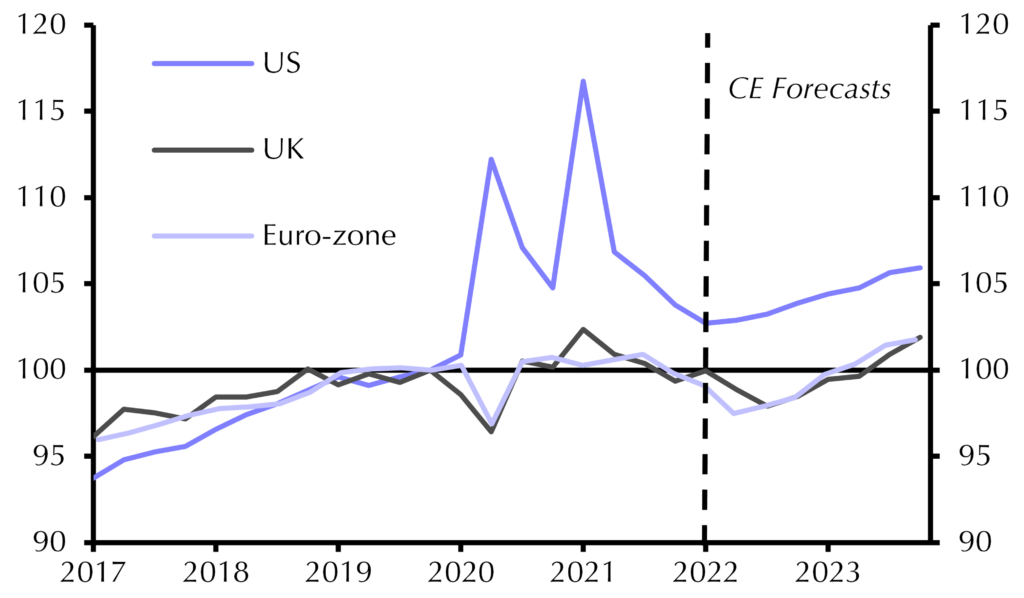