This is not a grown-up race for the Conservative party leadership. A grown-up race would involve grown-up debate around the economic policies needed for the UK to secure sustainable growth in its future. Instead, we have the unedifying spectacle of two candidates battling almost exclusively on who can deliver the biggest tax cuts and when.

There has been almost no discussion about key issues such as post-Brexit trade and regulatory policy, energy and food security or long-term fiscal challenges. Most importantly, in articulating where they want to steer the UK as Tory leader and the country’s third Prime Minister in six years, neither Rishi Sunak nor Liz Truss has set out a plan to address the economy’s chronically low rate of productivity growth.

Average output per hour worked in the UK increased a paltry 0.7% a year in the decade before the pandemic. That’s well down on the 1.7% average in the five years before the global financial crisis, not to mention the 2.8% average of the 1980s and 2.4% of the 90s. (See Chart 1.) 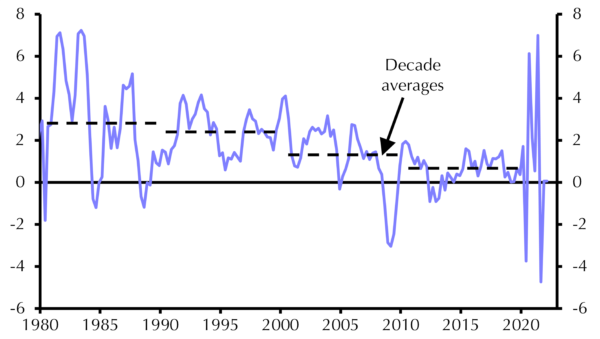 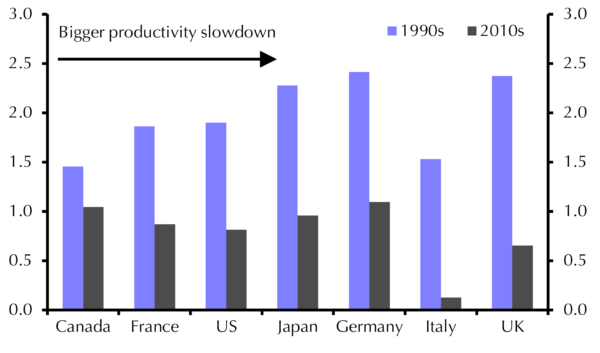 Reinvigorating productivity growth remains the defining challenge for economic policymakers. After all, it’s productivity growth that determines the rate at which incomes increase and living standards rise. If governments can raise productivity, many other seemingly intractable policy challenges – from the “cost of living” crisis to the green transition – will become much easier to address.

The developed world’s productivity problem has its roots in many areas but a key issue has been the low level of investment of the past 15 years. Once again, the UK stands out as a particularly bad performer – its investment rate was the lowest among G7 countries in the 2010s. But investment rates have fallen across most advanced economies over the past thirty years. (See Chart 3.) Of the G7 economies, only Canada and France have managed to keep investment steady as a share of GDP over the past three decades, and in Canada’s case that’s due in part to a residential investment boom that looks unsustainable. 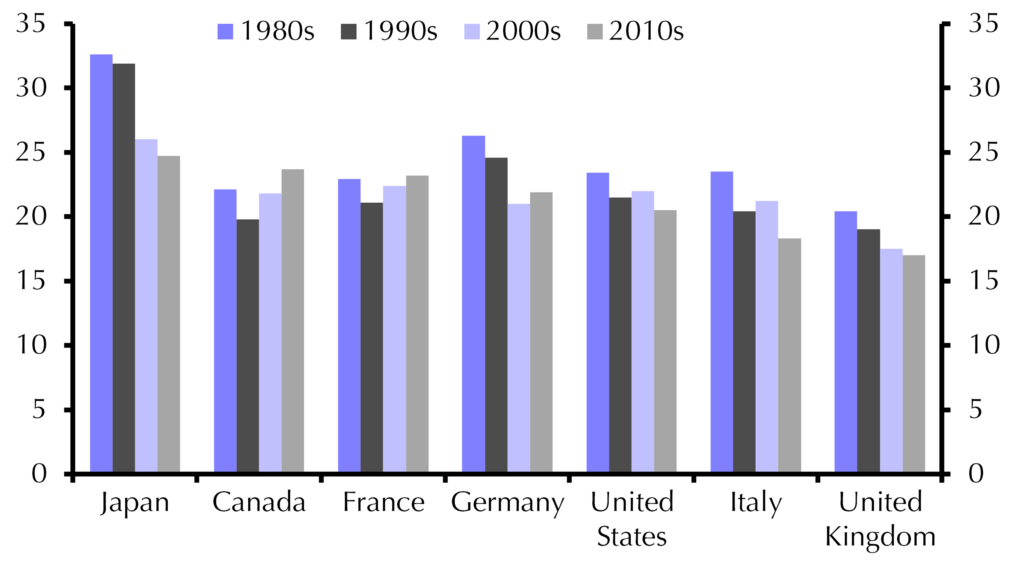 The weakness of investment is difficult to reconcile with the fact that ultra-loose monetary policies over the past 15 years have meant an extremely low cost of capital for firms. Likewise, the fact that several countries, with very different tax regimes, have suffered the same problem suggests that the cause goes beyond the narrow fixation on tax that has dominated the Conservative party leadership race.

Some of the decline in the reported investment rate may simply reflect measurement problems – estimating capital investment at a time of rapid technological change is extremely difficult. But most studies agree that this can explain only a small part of the weakness of investment (and productivity).

Another factor has been that the weakness of economic growth in the wake of the global financial crisis has created uncertainty over future demand, which has in turn made businesses reluctant to invest. This has created a feedback loop, in which concerns over the future state of demand have held back business investment, which itself has contributed to the weakness of demand. 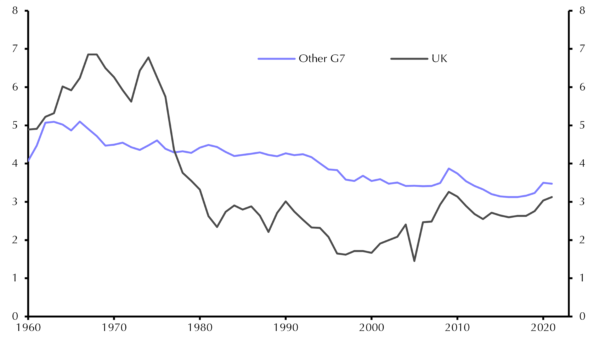 More fundamentally, the past decade has been characterised by excessive short-termism in both the public and private sectors. This has led governments to prioritise other areas of spending over investment. Similarly, it has caused corporations to prioritise shareholder distributions over long-term investment. The portion of US corporate profits used for share buy-backs increased from less than 5% in the early 1980s to 55% today. That has juiced the stock market, but at the expense of corporate investment. Similarly, non-financial corporates’ net distribution of dividends has risen as a share of post-tax profit in advanced economies, from about 13% in 1990 to around 20% now.

The deep and complex roots of the developed world’s productivity and investment problem means there is no easy fix. This is a long-term problem that requires a long-term plan. But like all ailments, the first step should be to correctly diagnose the issue and then conduct an open and honest discussion about the cures.

A sensible response would contain several elements. First, governments should commit to long-term public investment plans that have broad cross-party support. This should include investment in green technologies and in energy and food security. This in itself could be sufficient to support a pick-up in private investment. Research by the IMF found that a 1%-pt increase in public investment could increase private investment by 3%-pts in normal conditions, and up to 10%-pts in times of high economic uncertainty. But, over and above this, there may also be a role for public-private partnerships in stimulating investment. And tax credits for tangible and non-tangible investment should be increased.

Second, governments must find a way of providing reassurance to companies over the future state of demand. In the near term, this means maintaining macroeconomic stability in the face of high inflation and stretched asset prices. But governments also need credible growth plans that support private demand. This could entail a role for public procurement.

None of this will be easy. Raising investment and improving productivity will require creative thinking and a set of policies that last the course. But it is the only way of generating the economic growth needed to pay for the tax cuts that have so far dominated the debate in the UK.

If nothing else, talking about productivity rather than tax would contribute to a richer and more honest – and grown-up – public discourse.

Reports suggest that OPEC+ is weighing up a cut to output quotas for the second meeting in a row next week, presenting a downside risk to our above-consensus GDP growth forecasts in the Gulf...

What the new PM could, should and should not do

The new Prime Minster should acknowledge the size of the economic crisis, announce measures to shelter households and businesses from it, leave the Bank of England’s mandate largely unchanged, create...

Brazil Election Watch – the state of the race

Former President Lula holds a commanding lead in the polls ahead of Brazil’s presidential election on 2nd October. It seems unlikely that he would govern as radically as his party’s manifesto suggests...

Chancellor set to gamble on growth

A key prong to the new PM’s economic policy is to increase the size of the economic pie, rather than redistributing it, seemingly funded by higher public borrowing. If the new government’s gamble on...