Central bankers giveth and central bankers taketh away. It was their low interest rate policies which helped fuel an extraordinary – and extraordinarily global – rise in house prices. As a generational rise in inflation brings that low-rate era to a rapid close, our earlier warning that housing markets would prove most vulnerable to policy tightening is becoming a reality.

In the US, mortgage applications have fallen by 28% from their peak, new home sales are down by 17% and housing starts have dropped by 13%. A similar story is playing out in the UK, Canada, Australia, New Zealand, and Sweden. How bad could things get?

Forecasters can fall into the trap of thinking that the latest downturn will look like the last. But 2022 is not 2008. Admittedly, in real terms global house prices are now running well above their long-run trend, and the recent surge in prices looks alarmingly similar to what happened in the run-up to the global financial crisis. (See Chart 1.) Housing markets in Canada, Australia and New Zealand have been particularly hot, but the US, UK, and Sweden have also seen double-digit price growth over the past year. 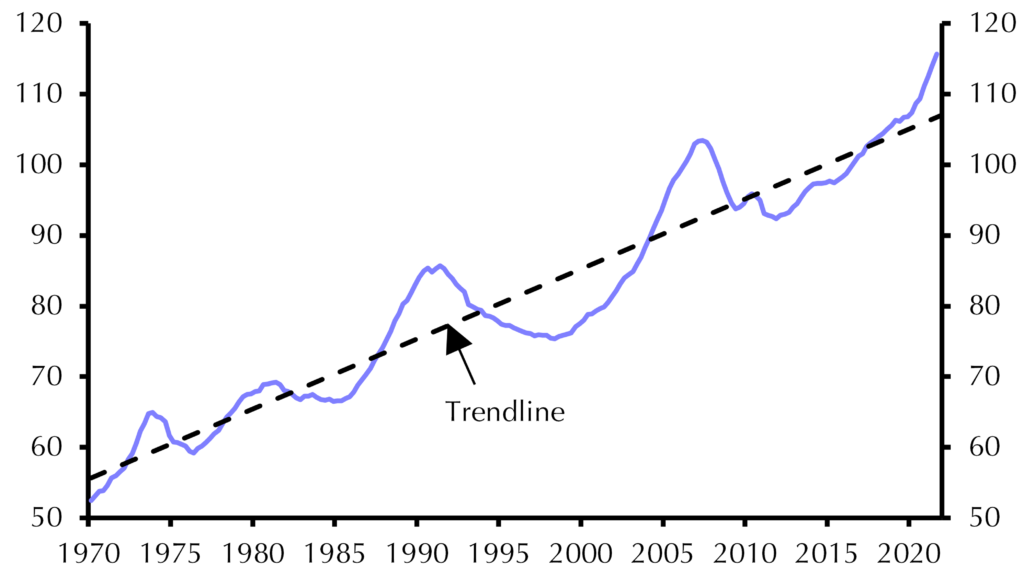 But the underlying drivers of the latest rise in prices are very different to those behind the surge in the mid-2000s. Back then, a bubble in house prices was inflated by a rapid expansion in mortgage debt that was facilitated by lax regulation and loose lending standards. When the bubble burst, homeowners found themselves in negative equity and forced selling created a self-reinforcing downward spiral.

There is less leverage in today’s housing market. Household debt as a share of income increased sharply between 2000 and 2007, but dropped back during a period of post-crisis deleveraging and has been stable for the past few years. (See Chart 2.) Meanwhile, regulation that was put in place after the last crisis means that banks are now in much better shape.

Chart 2: Household Debt as a % of Disposable Income in Advanced Economies 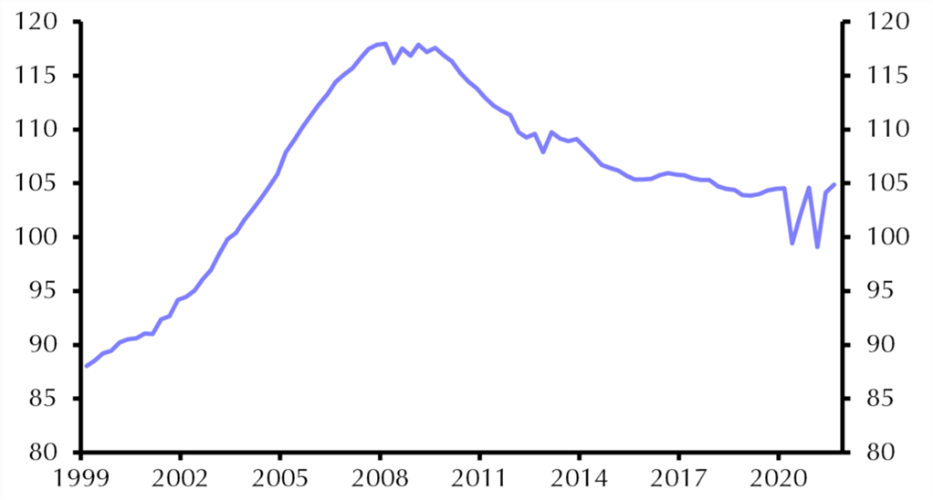 Instead, the latest surge in house prices has been underpinned by the extremely low level of nominal (and real) interest rates. In the UK, low borrowing costs mean that, despite the rise in prices, mortgage payments as a share of median disposable income are still well below the levels seen in both the mid-2000s and the early-90s housing bubble. (See Chart 3.) 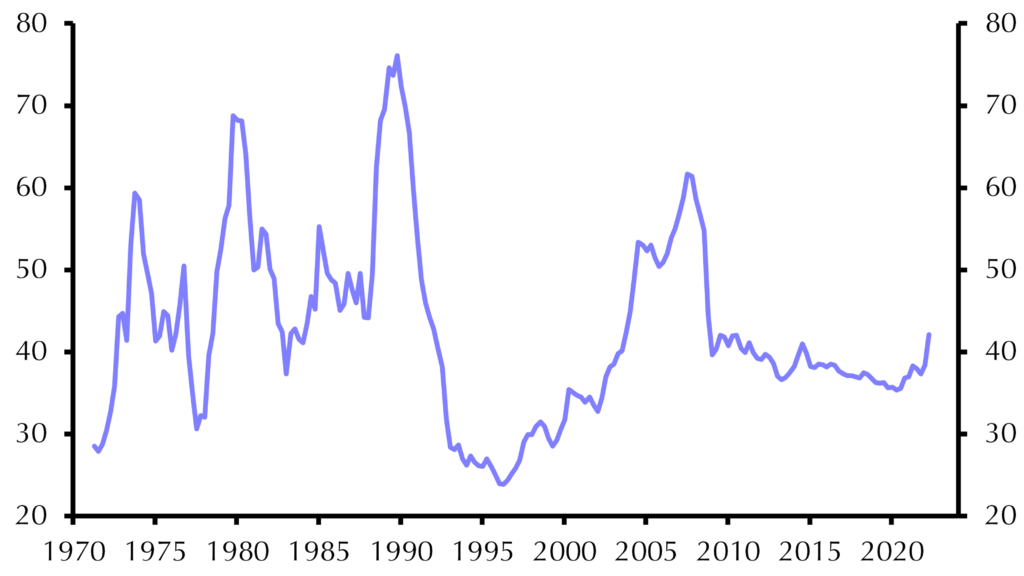 The counterpart to this, however, is that by raising interest rates to squeeze inflation, central banks are also removing the key prop to housing markets. Granted, the shift from variable to fixed-rate mortgages will slow the pass-through of higher policy rates to household mortgage costs. This is particularly true in the US, where the structure of the mortgage market has enabled borrowers to lock in low rates.

But higher rates will squeeze first-time buyers and any homeowners that need to refinance. Since the start of this year, average rates on new mortgages have increased from 2.9% to 5.9% in the US and from 2.7% to 5.1% in Canada. The increase in the UK has so far been smaller (1.6% to 2.0%) but mortgage rates are likely to rise further as the Bank of England continues to tighten policy. And there are growing signs that this rise in borrowing costs – and the anticipation of further increases to come – is already fuelling sharp downturns in housing markets across advanced economies.

In a recent note, we outlined the four stages of housing downturns. First comes weakness in surveys of housing market sentiment (for example, the University of Michigan survey in the US, and the RICS survey in the UK). After that, we start to see measures of buyer traffic (such as enquiries and so on) fall back. In the third stage, measures of housing market activity, such as mortgage approvals, sales and starts, start to drop. And finally, house prices fall.

The US, UK, Canada, Australia, New Zealand, and Sweden are now all in the third stage of the downturn. What’s more, compared to the mid-2000s, this one is happening more quickly, with most indicators showing sharper initial falls.

That doesn’t mean that we should expect the same scale of price falls in the fourth stage as were seen around the global financial crisis. The macro backdrop and market dynamics are different to the mid-2000s, and the outlook today varies between economies. We think that house prices will fall by 20% in Canada and New Zealand, where markets are particularly over-valued, by 15% in Australia, and 10-15% in Sweden. But price falls are likely to be smaller in the UK (~5-10%) and the US (~5%). Even so, the fact that indicators in the first three stages of the downturn have rolled over so quickly suggests that we should expect to see price falls in all of these markets soon.

The good news is that banks and households look better placed to weather a downturn in the housing market compared to the mid-2000s. A crisis on the scale of 2008 is unlikely. But a housing downturn will nonetheless cause pain for developers and the construction sector, and it’s possible that this could spill over into problems in the non-bank financial sector. Downturns have a way of uncovering vulnerabilities in areas that are difficult to anticipate.

All told, we think the shift from boom to bust in housing will shave between 0.5% and 2.0% off GDP in the US, UK, Canada, Australia and New Zealand over the next couple of years. (The US sits at the less extreme end of that spectrum, while Canada, Australia and New Zealand sit at the more extreme end.) This will create a dilemma for central banks as they continue to battle surging inflation. Housing problems are unlikely to deter the Federal Reserve and the Bank of England from tightening policy over the next year. But in Canada, New Zealand, and Sweden, where vulnerabilities are greater, they could mean that interest rates are not raised by as far as the markets currently anticipate.

The latest manufacturing PMIs suggest that global industry has already weakened significantly and is set to perform worse in the coming months as high inflation and rising interest rates take their... 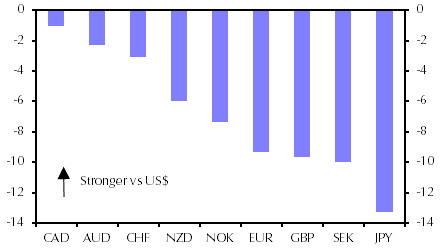 We doubt the Canadian dollar’s resilience will last much longer

The Canadian dollar has held up relatively well against the US dollar so far in 2022, but we think the factors underpinning the loonie’s resilience will fade and push it lower against the greenback...