From timely reactions to market developments to prescient deep dives into big picture issues such as the end of economic outperformance, this overview service provides insight into the cross-cutting themes and issues affecting emerging markets as a group. Our EM overview service includes access to a number of our proprietary indicators, including our monthly gauge of capital flows.

The subscription to this service includes 3-4 publications a week, access to our online research archive and our economists, and the opportunity to attend our conferences, forums and webinars.

When will EM central banks turn to interest rate cuts?

Monetary tightening cycles in EMs are advanced relative to DMs, and are now drawing to a close in many countries. Elevated inflation will mean that policy will stay tight over the coming months, but...

EM inflation has passed the peak

Having surged for the best part of two years, EM inflation appears to have passed the peak in this cycle. Our measure of aggregate EM inflation dropped from 7.8% y/y in September to 7.4% y/y in...

Russia’s agreement to extend the Black Sea grain deal with Ukraine should help to keep a lid on wheat and corn prices over the coming months, reducing upward pressure on inflation in the emerging...

Higher interest rates and larger private sector debt burdens mean that debt interest service ratios could rise to levels last seen in the 1990s in many EMs next year. This is unlikely to be a major...

Tighter global monetary policy and the strength of the US dollar continue to punish a number of frontier markets with weak sovereign balance sheets. Meanwhile, worries about Turkey’s balance of... 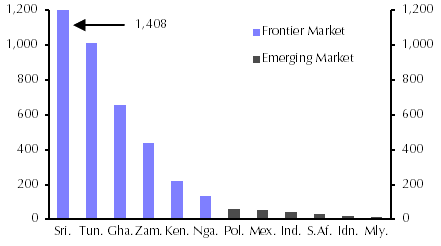 The effects of the war in Ukraine and strong dollar are causing sovereign debt risks to build in a handful of frontier markets with weak balance sheets, while public debt dynamics in parts of Emerging... 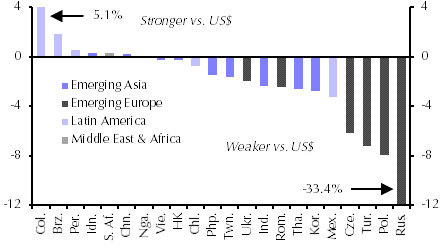 Financial markets in Central Europe have been hit hard by the contagion from the war in Ukraine, but spill-overs to other EMs have been limited so far. If the war were to result in a sustained period... 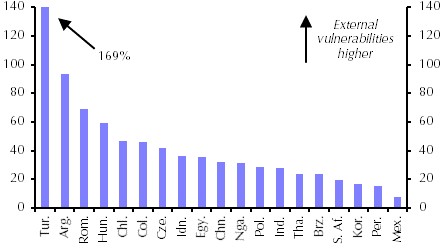 Turkey and frontiers in the firing line

The dramatic slump in the Turkish lira over the past month once again leaves the currency firmly in crisis territory. One crumb of comfort is that Turkish banks are in a better position to cope with... 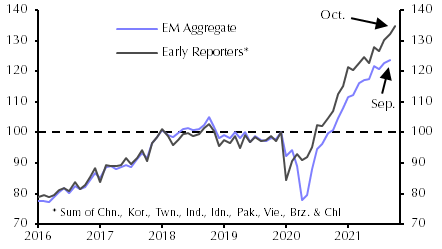 The impact of Omicron on EM trade

If the new Omicron variant leads to tighter containment measures across the world, that would probably prop up demand for pandemic-related goods to the benefit of Asian exporters. Meanwhile, oil... 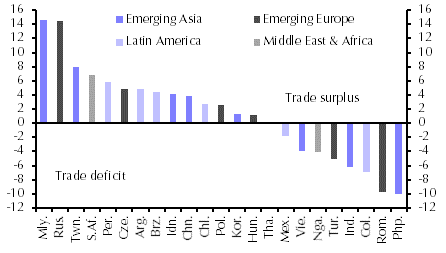 The big increases in EM commodity producers’ trade balances this year are likely to go into reverse if, as we expect, the prices of energy and metals fall back. At the same time, the manufacturing... 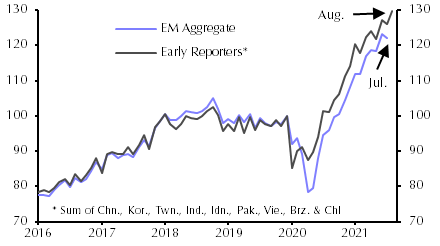 It looks like EM exports rose further in August and, possibly, September too. And while we expect them to decline over the coming quarters, they will remain elevated. However, China’s property... 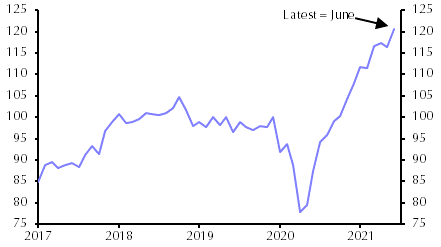 EM goods exports may have reached a turning point

Having surged over the past year or so, EM exports appear to be peaking as final demand is levelling off and commodity prices are dropping back. That said, exports will likely remain at elevated...

With monetary tightening cycles approaching their ends in many emerging markets (EMs), we think local-currency (LC) sovereign bond yields will, in general, be much lower in a couple of years than they...

Hawkish central banks may still be still a headwind for EMs

We think developed market (DM) monetary policy may be a threat to emerging market (EM) assets for some time yet. Note: Join our EM team on Thursday, 1st September for their latest monthly online...

We think EM assets will remain under pressure

We expect the yields of emerging market (EM) local-currency (LC) and dollar sovereign bonds to rise further and EM equities to lose more ground as “risk-free” rates continue to climb and global...

We think EM sovereign bond yields will resume their rise

While the yields of emerging market local-currency and dollar-denominated sovereign bonds have dropped back in recent weeks, we expect them to resume their rise before long. US Payrolls Drop-In (3rd... 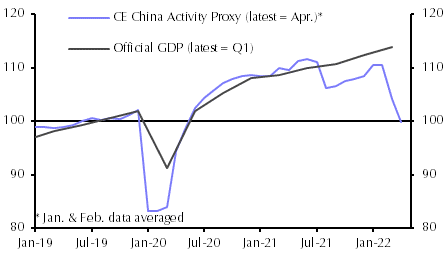 EM growth hit by China lockdown and war in Ukraine

Recently-released Q1 GDP figures showed that most EMs performed well at the start of this year, but headwinds are growing. Lockdowns are dealing a heavy blow to China’s economy and spillovers from the... 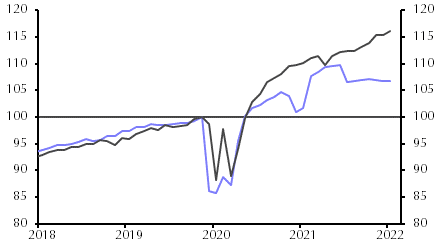 Many EMs have started the year on a solid footing, but challenging months lie ahead. While high inflation is likely to weigh on consumption, spillovers from lockdowns in China and the war in Ukraine...

Clouds gathering over the near-term outlook

Activity in large parts of the emerging world has rebounded following the easing of Omicron waves, but the war in Ukraine has caused the growth outlook for most EMs to worsen again. While commodity...

Large Omicron waves have caused activity to weaken in many EMs in Q1, but the good news is that mobility appears to bounce back quickly once outbreaks subside. As a result, the economic hit is likely...

EM GDP growth has slowed sharply this year and is likely to remain sluggish in 2023 and 2024 as weak external demand and tight financial conditions take their toll. Having started hiking rates much... 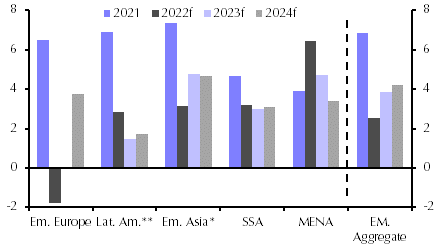 EM GDP growth will be weaker than most expect in 2022 and 2023 as China’s economy rebounds only moderately and activity slows elsewhere. Inflation is set to remain elevated for some time yet, and... 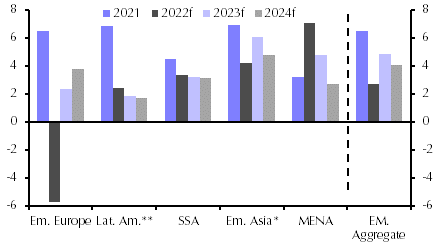 Growth to underwhelm as inflation surges

Lockdowns in China and spillovers from the war in Ukraine will slow the EM recovery and growth is likely to be weaker than most expect. Recession risks are rising in Emerging Europe in particular. On... 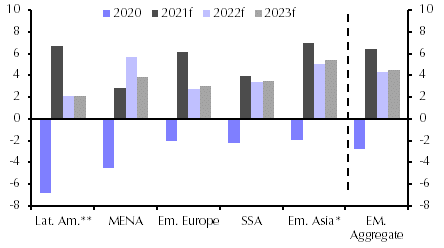 Growth across much of the emerging world will be weaker this year than last, with Emerging Europe and China in particular likely to fall short of consensus expectations. The EM monetary tightening...

EM inflation has passed the peak

Having surged for the best part of two years, EM inflation appears to have passed the peak in this cycle. Our measure of aggregate EM inflation dropped from 7.8% y/y in September to 7.4% y/y in...

Rates to stay high for a long while yet

EM tightening cycles have continued apace but, having started raising rates much earlier than their DM (and Asian) peers, some central banks in Latin America (Brazil, Chile) and Emerging Europe (Czech...

The ramping up of the US Fed’s hawkish rhetoric has turbocharged the dollar’s appreciation against EM currencies, with most falling by 2-6% against the greenback since the start of the month...

The growth outlook for the emerging world has taken a turn for the worse. The latest activity data for China suggest that the post-lockdown recovery has lost steam. The PBOC has responded by lowering...

Higher interest rates and larger private sector debt burdens mean that debt interest service ratios could rise to levels last seen in the 1990s in many EMs next year. This is unlikely to be a major...

When will tourism recover from the pandemic?

The post-pandemic recovery in travel and tourism still has some way to go in parts of the world that have been slower to lift restrictions, such as in Asia. And China’s reluctance to move away from... 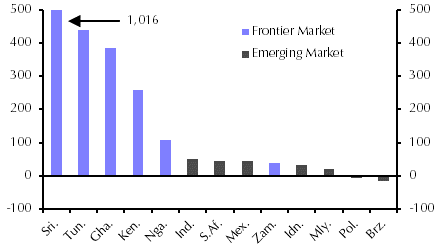 EM sovereign debt: where do the risks lie?

The strong dollar and spill-overs from the war in Ukraine have caused sovereign debt risks to escalate in some frontier markets. But most large EMs have far stronger public sector balance sheets...

For the most part, EMs are well placed to withstand rising US interest rates, but there are pockets of vulnerability where external financing needs are significant. Among the large EMs, Turkey...

When will EM central banks turn to interest rate cuts?

Monetary tightening cycles in EMs are advanced relative to DMs, and are now drawing to a close in many countries. Elevated inflation will mean that policy will stay tight over the coming months, but...

Russia’s agreement to extend the Black Sea grain deal with Ukraine should help to keep a lid on wheat and corn prices over the coming months, reducing upward pressure on inflation in the emerging...

Foreign capital inflows into EM financial markets have risen sharply so far this month, as investor risk appetite has improved. But with the global economy set to enter recession, we aren’t convinced...

The dramatic improvement in EM public finances since the height of the pandemic is starting to run out of steam. And we think that fiscal dynamics are likely to get worse next year in parts of Central... 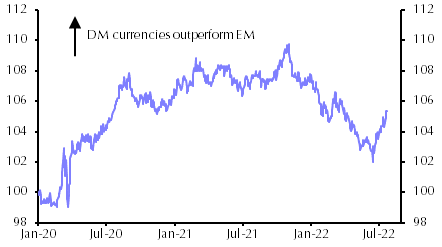 EM FX has a bit further to fall; some pockets of greater concern

With global economic growth weakening and risk sentiment unlikely to rebound sustainably this year in our view, we think that EM currencies generally will remain under pressure over the next several... 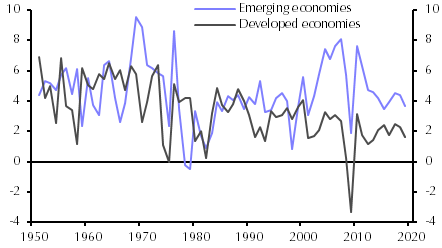 Five years on from the “End of a Golden Age”

Five years ago this October, we published a piece arguing that the “golden age” for emerging markets had ended and that they were entering a period of permanently weaker growth. Since then, many of...

China is about to flood EMs with vaccines

By September, China could be in a position to export 340mn vaccines doses each month – more than most regions of the world have administered in total so far. China’s vaccines are less effective than... 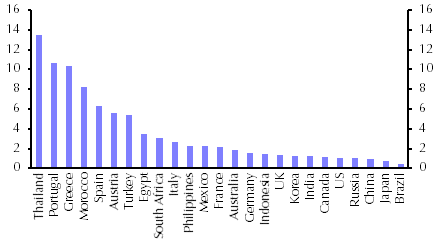 The implications of sustained travel restrictions

Taken alone, prolonged restrictions on international travel would do little to hinder the global recovery since overseas tourism is a small share of world GDP and some of the lost spending would be...

The spreads of sovereign dollar bonds over US Treasuries are in distressed territory in almost a third of EMs covered in the JP Morgan EMBI Index, with the majority of those being frontier markets. In...

There has been plenty of doom and gloom surrounding the outlook for frontier economies over recent months, particularly Sri Lanka and Tunisia. But there are some places where we hold more upbeat views... 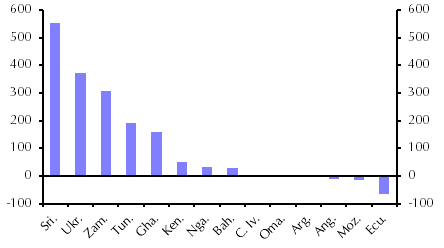 Sovereign dollar bond spreads have widened significantly in several Frontiers over the past couple of months, driven largely by country-specific factors. There are reasons to be hopeful that outright... 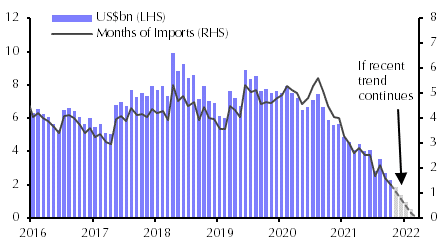 The precipitous decline in Sri Lanka’s foreign exchange reserves means the risk of a near-term sovereign debt default is increasing. Elsewhere, Tunisia also stands out on account of its public debt...