Next week marks the tenth anniversary of Mario Draghi’s pledge to do “whatever it takes” to save the euro. That was the line-in-the-sand moment that paved the way for policies that eventually brought an end to the crisis which had engulfed the euro-zone. A decade later, the single currency again finds itself in the crosshairs, last week dropping to below parity against the US dollar. Is history repeating as the European Central Bank (ECB) prepares to meet for this week’s crunch meeting – and should the Bank respond?

At face value, the fact that the euro has dropped so far against the dollar in recent months looks a little odd. After all, it didn’t breach parity at the height of the euro-zone crisis, when Draghi made his famous pledge and when the very future of the single currency was in question. (See Chart 1.) The euro-zone still has its challenges, but its immediate future is now much more secure. 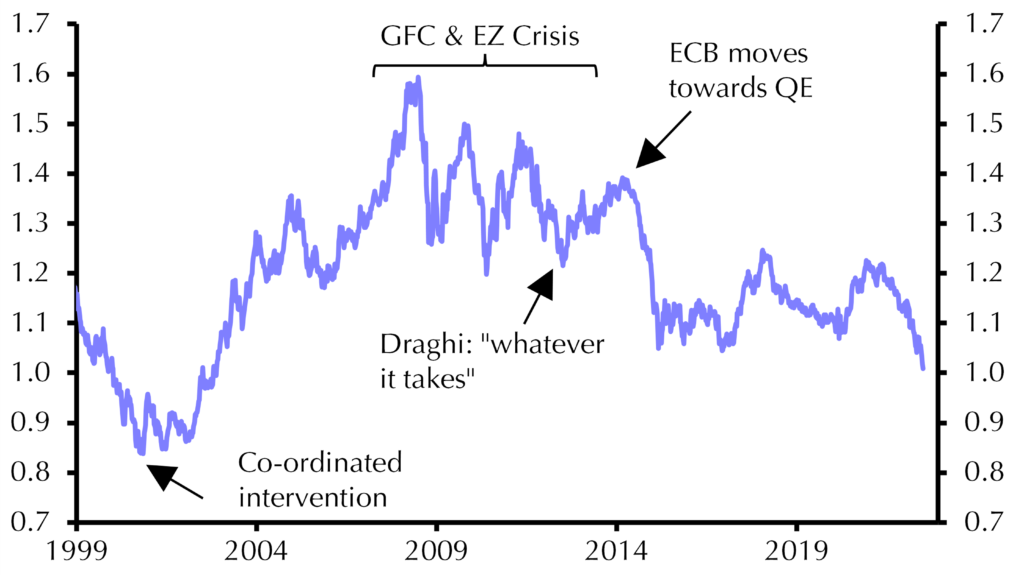 The only time that the euro has previously fallen to below parity was in the early 2000s, when a US recession drove a flight to safety, and when there were doubts over the credibility of the ECB and its new currency. The debate in markets back then was whether the ECB would pursue “hard currency” policies (like Germany) or “soft currency” policies (like Italy), and even whether the euro would prove more durable than the ERM, the fixed exchange rate system which collapsed in spectacular fashion in 1992. The ECB has since done enough to persuade markets that it will act more like the pre-euro Bundesbank than the pre-euro Banca d’Italia and, for all its flaws, the euro has endured. 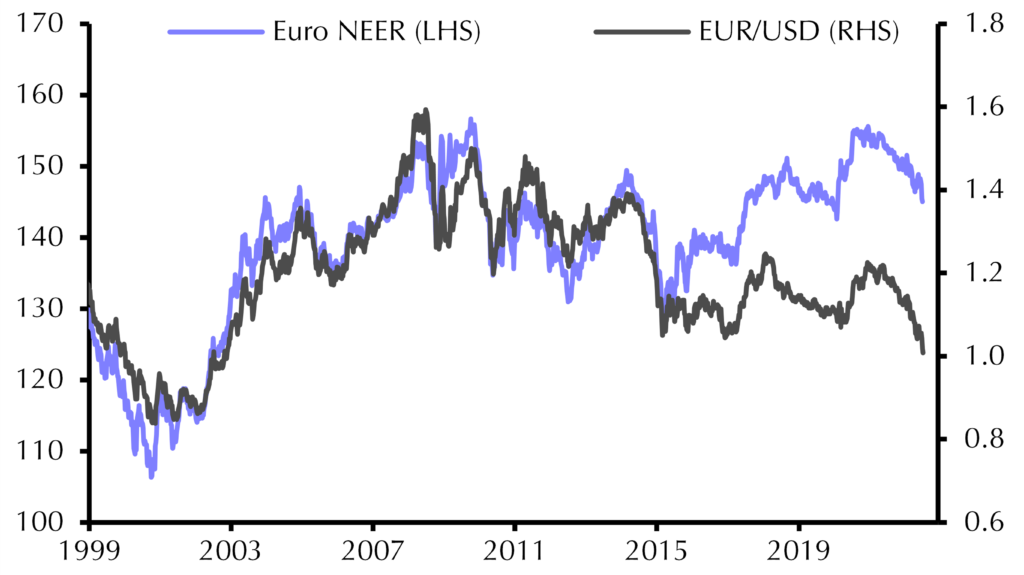 The euro’s slide against the dollar since the start of 2021 can be largely explained by the fact that expected interest rate differentials have moved against it. (See Chart 3.) 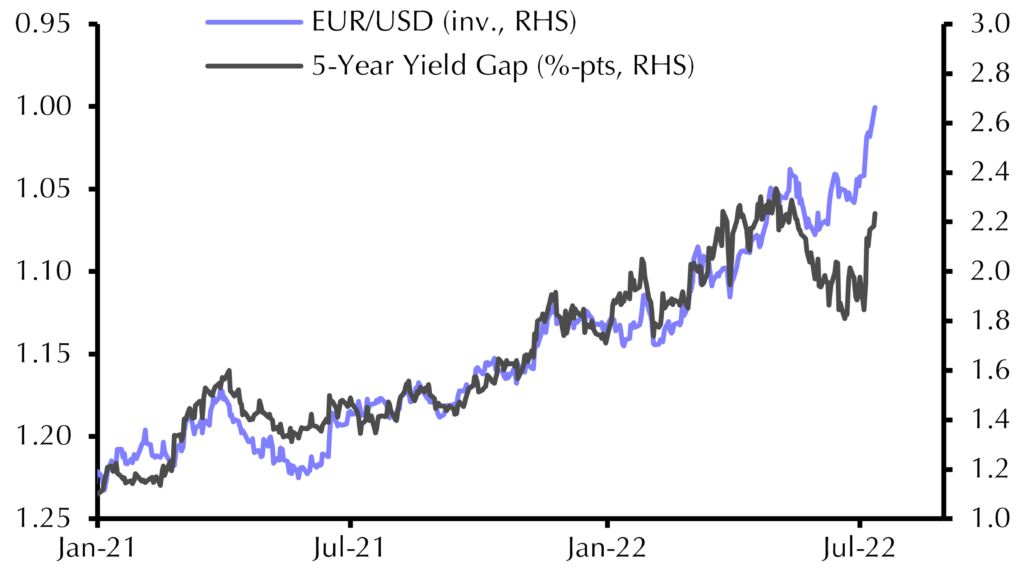 Meanwhile, the drop in the trade-weighted euro since the start of the year mainly reflects the fact that the euro-zone’s terms of trade have deteriorated significantly as the cost of its food and energy imports have soared. Although the euro now appears to discount some chance of an outright shortage of gas this winter – a risk premium that could unwind if such an outcome does not materialise – our FX team thinks that the euro doesn’t look significantly undervalued relative to the euro-zone’s current economic fundamentals.

In the near-term then, much will depend on how the region’s energy crisis evolves. As things stand, it’s easier to see more downside than upside for the single currency over the coming months. Europe’s natural gas supply is in large part at the mercy of Russia and its unpredictable leader. Even if a full-blown energy crisis is averted, the European economy will slow markedly, while the US holds up relatively well: interest rate differentials will probably widen a bit more as the Federal Reserve presses ahead and the ECB lags behind.

The drop to below parity in the early 2000s brought a co-ordinated response from the ECB, the Fed and other G7 central banks, who intervened in currency markets to put a floor under the euro. The ECB also kept raising its policy rate after the Fed stopped hiking in early 2000. This time, however, while ECB officials are likely to acknowledge the euro’s drop in its communications with the market, they won’t feel under the same pressure to act. Unlike in the early 2000s, the euro’s fall hasn’t been driven by concerns about the credibility of the single currency itself. And while the dollar/euro exchange rate is important for markets, it is the trade-weighted exchange rate that should be the primary concern for policymakers. Accordingly, it is difficult to make a case for an ECB response.

The Governing Council has far more to worry about than the euro’s value against the dollar. Its rate hike cycle is starting far later than those of its peers, and even as euro-zone inflation nears 9%, its policy rate will still likely end this week at -0.25% after the Bank lifts off on Thursday with an anticipated 25-bp hike (join our online briefing on what to expect from the ECB meeting by registering here.) Interest rates will need to rise further and faster over the coming months.

In addition, the ECB has to develop a credible tool to prevent a blowout in peripheral bond spreads as policy is tightened. The widening of peripheral spreads earlier this year – and the subsequent failure to adequately address the issue at June’s scheduled policy meeting – led to a hastily-arranged emergency meeting of the Governing Council which agreed to develop a new programme to contain spreads. Since then, we’ve heard relatively little about what has been named the Transmission Protection Mechanism.

Markets have given policymakers the benefit of the doubt and the recent decline in the euro has not been driven by existential concerns about its future. But the complexity of the ECB’s unique challenge was laid bare last week when political ructions in Italy triggered fresh selling in the bond market. (See Chart 4.) 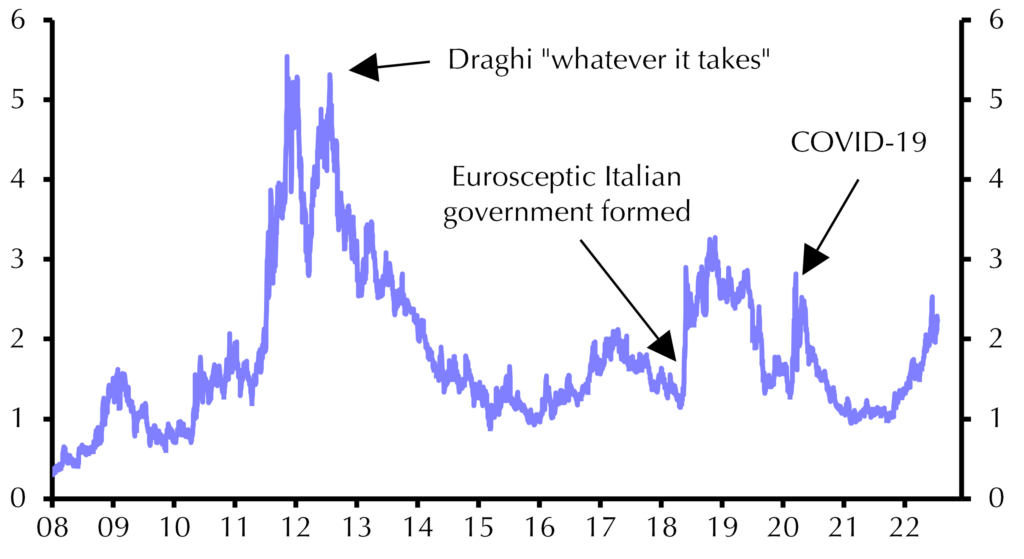 If the ECB fails to put sufficient meat on the bones of its anti-fragmentation plans then it runs the risk of an even greater negative reaction from the market. Any sense that the ECB is dragging its feet, or that the final outcome won’t be effective enough, will see fragmentation concerns rush back onto the agenda, fanning the flames of an altogether more worrying fall in the euro.

Ten years after Draghi’s pledge to do whatever it takes, Christine Lagarde risks repeating history. She must avoid drifting into another crisis that would ultimately require her to make a similar pledge to her predecessor. #

GDP data published this week confirmed that the euro-zone economy grew at a decent pace in the first half of the year. But this is unlikely to last, and next week we expect the first business surveys...

What’s needed to put public debt on a sustainable footing?

Long-term fiscal sustainability is governed by what happens to a combination of economic growth, government borrowing costs and the primary budget balance. Since we’re sceptical that the tax cuts...

What to make of the “Bailey put”

The Bank of England’s extraordinary intervention in the Gilt market yesterday highlights the increasingly difficult trade-offs facing central banks, and their problematic implications for financial...

Ongoing energy supply concerns could weigh on the euro further

The indefinite closure of the Nord Stream 1 pipeline strengthens the “stagflationary” headwinds facing euro-zone economies and reinforces our view that the euro is likely to fall further against the...