We’ve reached that traditional time of year when research teams send their predictions for the year to come. We’ll publish our contribution at the end of this week. But before looking ahead, it’s useful to look back and see what we got right – and wrong – in 2021.

Twelve months ago, we said that 2021 would be a year of “recovery, catch-up and continued policy accommodation”. In other words, we thought that the global economy would stage an impressive recovery, that those economies that had lagged behind in the second half of 2020 would catch up in 2021, and that central banks would keep policy settings extremely loose. At the risk of blowing our own trumpet, this has broadly been the case.

Our forecasts for economic growth this year have generally been above the consensus, and over the course of the year the consensus has moved in our direction. Last December we forecast that global GDP would grow by 6.2% in 2021, while the IMF, a rough proxy for the consensus, thought it would grow by just over 5%. We don’t yet have full data for Q4, but the trackers we follow suggest the global economy will grow by about 6% this year. (The IMF’s forecast is now 5.9%.)

The economies that lagged behind in the initial phase of the recovery, notably the euro-zone and the UK, have also caught up this year. Chart 1 shows the path of real GDP for several economies, indexed to 100 at the pre-pandemic level. You can see how the gap between the leaders and laggards is smaller now than was the case at the end of last year. The UK and the euro-zone have made up ground, while the leaders have slipped back. We argued that 2021 would be “a year of two halves” for China, with strength in the first half giving way to stagnation in the second. As the chart shows, this is indeed what happened. 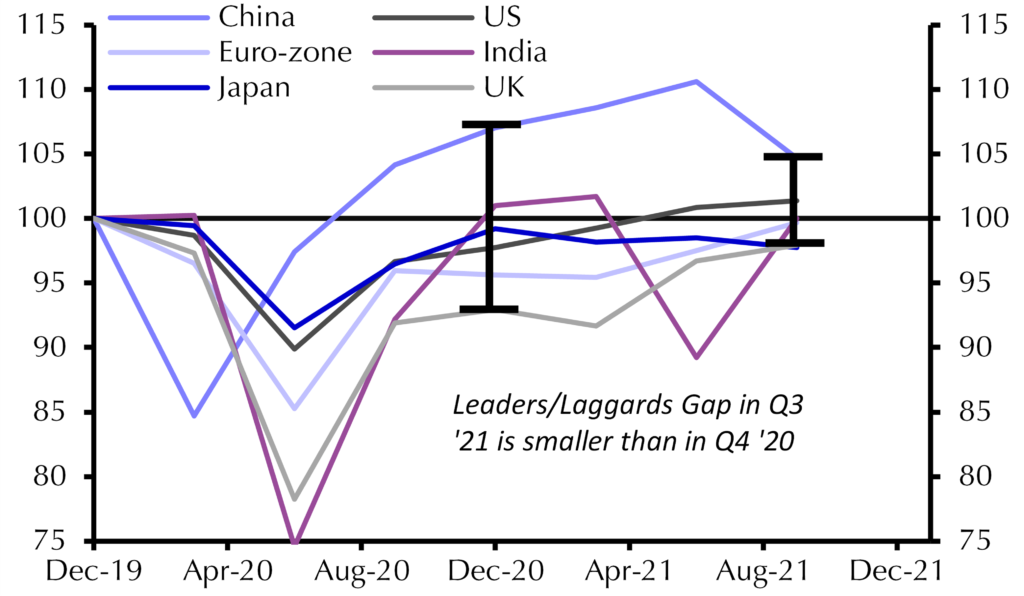 Finally, it doesn’t require a chart to show that, despite a sharp acceleration in inflation (about which more later), central banks have kept monetary conditions extremely accommodative.

All of this has meant that our market calls for 2021 have been broadly correct. We argued that “continued monetary accommodation should keep a lid on bond yields which, against the backdrop of economic recovery, should mean a generally positive environment for risky assets” including equities and commercial property. We also argued that in an environment of higher inflation, TIPS would outperform conventional US government bonds.

So far, so good. But what did we get wrong? Three things stand out. First, while our forecast for returns from global equities was almost spot-on, like many others we missed the extreme outperformance of the US stock market. Second, while we anticipated that commodity prices would recover this year, we underestimated the strength of the rally. (We thought Brent would end the year at $60pb, whereas it is currently trading at just over $70pb.)

Finally, we underestimated the magnitude of inflation’s rebound. Going into 2021, we had been warning of a pick-up in inflation pressure, particularly in the US, where we were right to predict that this would be far more than a “transitory” episode to do with economic reopening. We also made the question of inflation’s rebirth the topic of our annual research deep-dive to provide a more in-depth understanding of the near- to long-term global risks associated with rising price levels.

But while our forecasts for inflation were above consensus, they were, in hindsight, a bit too timid. In most countries we thought it would peak at around 3% or so, whereas it now looks likely to peak somewhere between 5-7%. This is partly to do with the sharp surge in commodity prices – energy has accounted for about six-tenths of the rebound in advanced economy inflation this year – but also because goods and labour shortages bit harder than we had assumed.

Looking ahead, one of the most important lessons for 2022 is that the dominant macro and market issues are being shaped by problems on the supply side of the global economy. Demand rebounded strongly this year, as we anticipated, but in many areas, supply has struggled to keep pace. This largely reflects frictions caused by reopening economies from a standing start that should eventually ease. But this will take time and supply-side strains are likely to be a continuing theme for much of 2022. We’ll cover the implications of this in more detail in our forthcoming piece previewing next year, but one consequence is likely to be that, after a strong 2021, growth in 2022 will be weaker than most currently anticipate. Likewise, while inflation should fall back next year, in most countries it will do so at a slower pace than most forecasters now expect.

Lula: lessons from the past

While Luiz Inácio Lula da Silva (better known simply as Lula), the front-runner in Brazil’s presidential race, has been vague about his policy stance, one common theme from his campaign is nostalgia...

Peak inflation and the prospects for equities

Although we think this week’s disappointing CPI report in the US is just a bump on the road towards much lower inflation, and that today’s rather disappointing news on retail sales and industrial...

The improvement in government budget positions across Latin America over the past year or so has been driven in large part by temporary factors and is likely to reverse before long. As things stand...

We now think that the reduction in consumer real incomes due to high inflation will push the economy into recession this year. But the Bank of England is likely to have to keep on raising interest...