Amid the outpouring of punditry which has followed the start of war in Ukraine is the idea that this conflict is a manifestation of the fracturing of the global political and economic order. On one side of this fracture are liberal democracies, such as the US and Europe, whose economies are open, and where labour and capital are allocated by market forces. On the other side are autocracies such as China and Russia, where decisions over the allocation of resources tend to be centralised and leaders believe that markets should serve the needs of the state.

There is a grain of truth to this. We have argued for some time that the era of ever-tighter global economic integration has ended. In its place, we now see decoupling and pressure on countries to align themselves around the twin poles of the US or China.

The wave of globalisation that spread in the 1990s and 2000s was underpinned by a belief among Western governments that integration would serve their strategic interests. Policymakers in the US and Europe thought that bringing China and the former Warsaw Pact countries into the global trading system would also steer them to becoming liberal market economies and embracing democratic norms. That strategy has had a mixed record of success elsewhere, but it is clear that it has failed with regards to Russia and China. Each is more autocratic now than two decades ago.

Beyond this common shift though, there are important differences between Russia and China that shape their global roles. China has reaped huge benefits from integration by transforming itself into a global manufacturing hub. GDP per capita has increased from less than 5% of US levels in 1990 to nearly 30% today. (See Chart 1.) In the process, hundreds of millions of Chinese people have pulled themselves out of poverty. In contrast, GDP per capita in Russia has fallen from over 50% of US levels in 1990 to just over 40% today. While incomes in China have converged with those of the world’s richest economies, incomes in Russia have fallen further behind.

Chart 1: GDP per Capita as Share of US (%, PPP exchange rates) 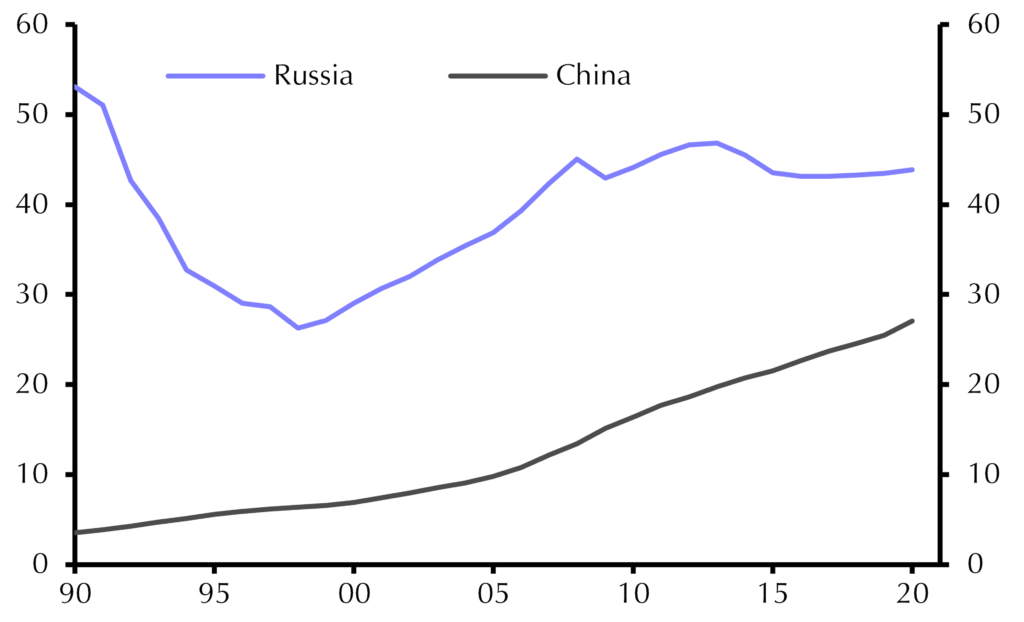 Accordingly, Beijing and Moscow have different interests with respect to the global status quo. China would like to shape it, but it has a strong interest in preserving it: Beijing’s actions show it wants to stamp its authority on the global economic order rather than dismantle it. In contrast, Russia’s indicate it has less incentive to preserve the current global order, provided that the world continues to buy its commodities. Indeed, President Putin’s actions are in part a consequence Russia’s relative economic failure and perceived injustices created by the post-Cold War settlement.

All of this will have important consequences for what happens next. At first sight, it looks as though Xi Jinping has decided that China should line up with Russia as the West attempts to punish it for the invasion of Ukraine. But this support will have its limits, as suggested by China’s abstention in a United Nations Security Council vote condemning Russia’s military actions. China can help out through trade and finance. But China is unlikely to do anything that risks a further rupture in its relations with the West – such as a wholesale breaking of Western sanctions. That wouldn’t be in China’s economic interests – access to global financial markets is more valuable than anything Russia can offer. And it wouldn’t be in China’s strategic interests either, as it would hasten Western efforts to forcibly decouple China from access to advanced technology.

This points to an important aspect of the decoupling debate. Both the US and China have been trying to reduce their dependence on the other in key areas, particularly technology. But both superpowers – unlike Russia – also have significant interests in maintaining many aspects of the status quo. The broad gains from trade make a restructuring of the global trading system unlikely. We do not anticipate widespread “reshoring” of production or a wholesale dismantling of global supply chains.

This isn’t to say that economic interests will always win out. But Xi has much stronger reasons than Putin to avoid a complete rupture in relations with the West.