This service offers independent economic analysis and unbiased forecasts for 6 countries: Switzerland, Sweden, Norway, Denmark, Iceland and Finland. It offers both timely responses to new data and more in-depth coverage of current trends and likely future developments, with a focus on currencies and other financial market variables.

The subscription to this service includes 3-5 publications a week, access to our online research archive and our economists, and the opportunity to attend our conferences, forums and webinars.

Our most recent Updates and Data Responses

Data published today show that the economy contracted by 0.6% q/q in Q4 as the resilience previously reported towards the end of last year has been revised away. With the more timely data for December...

The Norges Bank eased off the brakes today by leaving policy on hold, but signalled that it will raise its policy rate at the next meeting in March. We suspect that will be the final hike in this...

Yet another larger-than-expected increase in the Riksbank’s target measure of inflation and in the core rate suggest that policymakers are highly likely to raise rates by 50bp in February.

The continued strength of core inflation will encourage the Norges Bank to press on with another 25bp interest rate increase next week. While there is still some more upside risk to underlying...

The latest editions of our Weekly, Outlook, Chartbook & Bank Watch

Reasons for optimism on the Norwegian krone

The recent depreciation of the Norwegian krone might have further to run, but we think that rising energy prices and improved investor risk appetite will cause it to strengthen in the second half of...

Tightening cycles have further to run

Consumer price inflation has continued to accelerate in Switzerland and across the Nordics, adding to the pressure on central banks to tighten monetary policy more aggressively. In Switzerland...

One (more) and done

The Norges Bank is one step from ending its tightening cycle. We expect it to raise its policy rate by 25bp next week, to a peak of 3%. After that it is likely to pause while it waits to assess the... 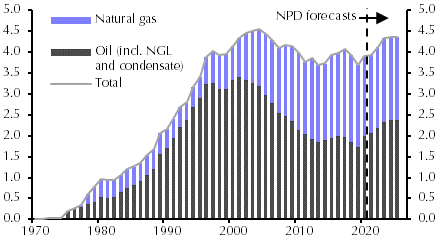 Fossil-like Norway won’t go the way of the dinosaurs

The UN’s annual climate change conference, COP26, will not have any discernible impact on Norway’s intention to keep pumping oil and gas over the coming decades. The irony is that Norway’s success in...

Riksbank to take a chance on “QT” next year

Housing market valuations in Sweden are even more stretched than on past occasions when the Riksbank has “leant against the wind” – that is, set policy tighter than needed to contain consumer price...

Sweden’s unique response to the pandemic means that it has acted as a control experiment for economists and epidemiologists alike. We suspect that its economy would have shrunk by an additional 3-4%... 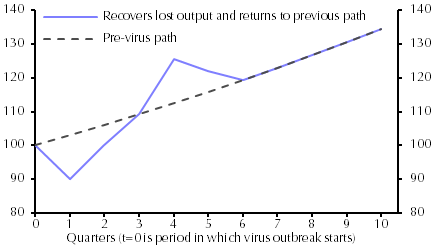 Lasting blow to supply capacity is not inevitable

It is by no means inevitable that the coronavirus crisis puts a big permanent hole in the supply capacity of economies (i.e. their ability to produce goods and services). With the right government...

Data published today show that the economy contracted by 0.6% q/q in Q4 as the resilience previously reported towards the end of last year has been revised away. With the more timely data for December...