Vladimir Putin believes Western sanctions are “akin to a declaration of war”. The Russian President’s reported comment gives a sense of his outrage at the punitive response to his invasion of Ukraine, and the impact it is already having on Russia’s economy. Historically, sanctions have had a mixed track record in how they have affected the economies of target countries. In some cases, such as those legislated against Iran in 2012, economies have been brought to their knees. In others, such as sanctions against South Africa from the mid-1980s and Russia from 2014, the economic impact was more muted. What matters is the scale and scope of the sanctions, and the extent of compliance.

The sanctions that have been imposed on Russia following the invasion of Ukraine have been designed to insulate Western economies to a significant degree from their effects. For this reason, energy trade has (for now at least) been excluded, and asset freezes and SWIFT bans have been targeted at specific institutions. Since energy accounts for 50% of Russia’s exports – and because the prices of oil and gas have surged in the wake of the war – Western governments were initially criticised for not going far enough. This was compounded by the fact that the asset freeze on Russian banks will be introduced gradually to minimise market disruption.

However, the decision to impose sanctions on Russia’s central bank (CBR) – effectively freezing over a half of the $630bn of foreign exchange reserves that it had amassed as part of the “Fortress Russia” policy – will be significantly disruptive to its economy. Such sanctions severely limit the central bank’s ability to support the ruble, provide foreign currency funding to commercial banks and process foreign currency payments for Russian companies.

It is a move almost without precedent: the only other central banks to have been sanctioned by the US are those of Iran, North Korea, Syria and Venezuela. And the hit to Russia’s economy has been substantial. The sanctions on the CBR have exacerbated the ruble’s collapse, threatened bank runs, and created acute strains in Russia’s balance of payments. In response, the CBR has been forced to impose capital controls and hike interest rates aggressively – despite the collapse in the real economy.

Compliance with sanctions has also been extremely strong so far. There is already evidence that sanctions are having a severe effect on cross-border transactions, including those in energy. This is perhaps best illustrated by the jump in the spread between the price of Urals crude (Russia’s main export blend) and Brent. (See Chart 1.) 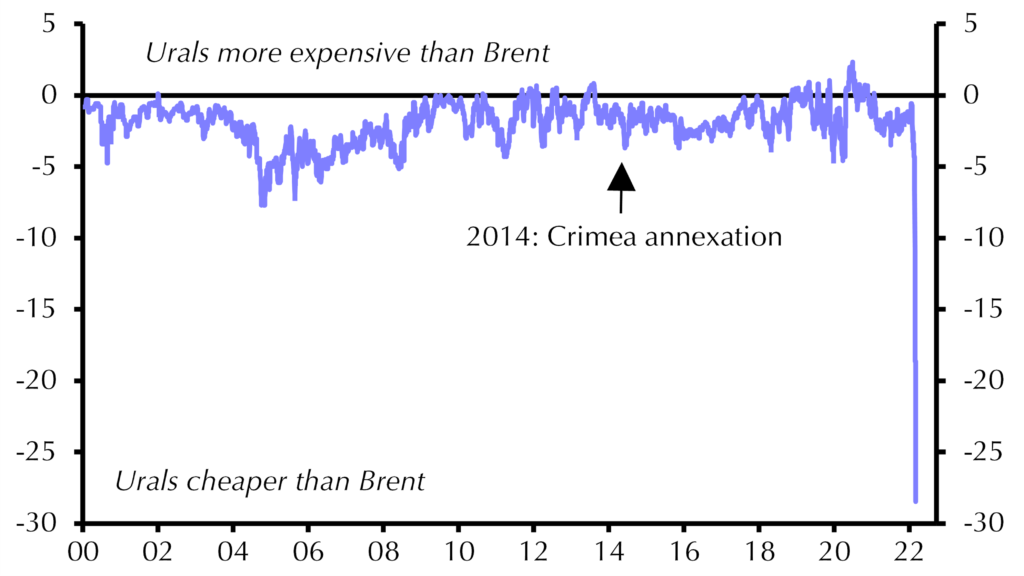 Strict compliance is also reflected in a shift in corporate behaviour. BP and Shell have pulled out of multi-billion-dollar joint ventures in Russia; VW, Toyota and BMW have idled local production, and Apple and Ikea have ceased sales in the country. Many freight carriers have halted deliveries to Russia whether by air, land or sea. What’s more, this pullback is not just confined to Western firms. Chinese banks have also become skittish about financing purchases of Russian oil.

Three factors explain the corporate response. The first is that the war and the sanctions themselves have imposed logistical, legal and financial barriers to transacting with Russia. The second is that reputational concerns have caused firms to “self-sanction”. And the third is that companies may be trying to get ahead of a further escalation in sanctions, particularly if they are concerned about the introduction of “secondary sanctions”, which have been designed by the US government to force third parties to avoid dealing with targeted countries.

While there’s robust debate about whether these sanctions will achieve their political goals and convince Mr Putin to change his behaviour, their economic impact is far more clear cut.

For Russia, they will mean a huge hit to GDP and incomes. This will come in two phases. The first is a period of acute pain as the economy adjusts to the effects of sanctions. We expect a peak-to-trough fall in GDP of 8%, which would put it in the same league as the recession during the 2008/09 Global Financial Crisis and Russia’s own economic crisis back in 1998. This is likely to be followed by a prolonged period of low growth or stagnation as Russia is pushed into economic isolation and fiscal and monetary policy is kept tight in order to run the external surpluses needed to generate foreign exchange while market access is curtailed by sanctions.

Other economies will also take a hit, though this will be much smaller and vary according to ties with Russia. Trade and financial ties are greater in Europe, and we have reduced our GDP growth forecast for the euro-zone by nearly one percent to reflect the effect of the war and associated sanctions on the region’s economy. But we don’t expect the post-pandemic recovery to be derailed.

Reported moves to bring energy trade within the scope of sanctions would have a larger economic impact on the euro-zone, although even in this scenario we think the region’s economy would be able to weather a short-term disruption better than might be expected.

Note: Our Europe and Commodities teams will be briefing on the outlook for Russian energy exports and Europe’s energy needs in a special online briefing on Tuesday, 8th March. Here are the registration details. 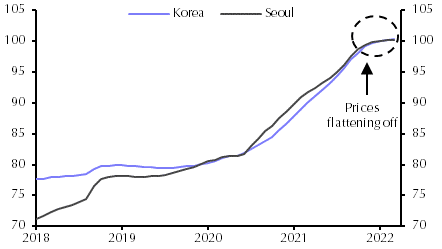 Today’s decision by the Bank of Korea (BoK) to hike its policy rate by 25bp to 1.50% is unlikely to mark the end of its tightening cycle given the strength of inflationary pressures. We expect at...

Consistent with softer economic growth, annual rental growth for office and industrial property in CEE markets slowed in Q4. However, rental growth picked up for retail, bucking the downward trend...

A further doubling of average incomes this decade, as pledged in the Party Congress today by President Hu Jintao, will probably not undermine China highly-competitive manufacturing sector.