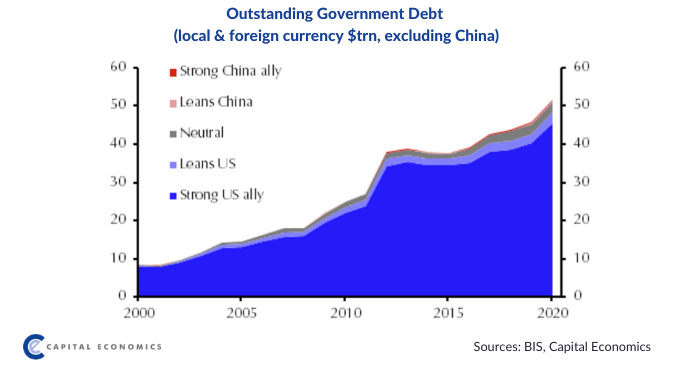 China may, quite reasonably, be considering how to safeguard its foreign exchange reserves in light of the West’s financial sanctions against Russia. It has no good options, says Chief Asia Economist Mark Williams. He estimates that almost all of the estimated $5trn that constitute China’s foreign exchange reserves plus the foreign assets of its state banks and sovereign wealth fund is theoretically exposed to Western government action. Although one option would be to diversify current holdings away from Western markets towards “friendly” countries, China doesn’t have the right kind of friends. The pool of investable sovereign debt that would be diplomatically acceptable has grown in recent decades but is still tiny. Drawing on the findings of our China team’s 2021 project ‘Mapping Decoupling’, Mark estimates that 88% of outstanding government debt globally (ex-China) has been issued by the US or one of its close allies. “The US and its allies are the world’s major suppliers of government bonds. That’s a natural consequence of one of the key finding of our project to map how the world is likely to decouple: the US-centred bloc is far bigger economically than that centred on China,” Mark says. Learn more: What will China do with its FX reserves?