Capital Economics began 2022 with a warning that global growth would be weaker this year than most economists were expecting. Our Global Economics team said multiple headwinds would result in disappointing growth in the major economies. Seven months later, that range of headwinds has only grown to the extent that our Global team warns in its latest quarterly Economic Outlook that some economies will fall into recession this year, while others will only just escape one. Forecasts for several major economies for this year and next have been cut again, to even further below the consensus. 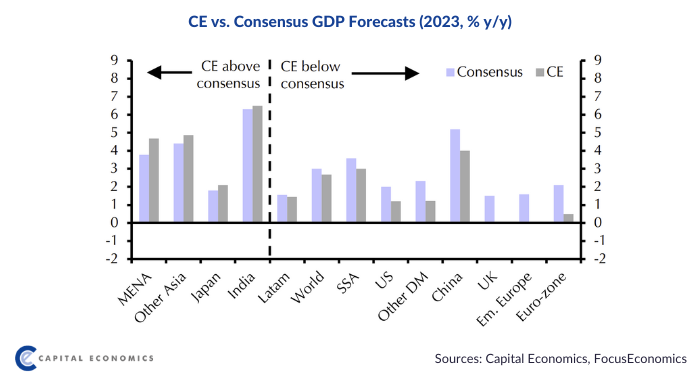 Those likely to see a downturn include the euro-zone, whose direct and indirect exposure to the Ukraine war mean a massive terms of trade shock which will ultimately hammer household incomes, the report says. The US, on the other hand, may avoid recession – but only narrowly. Even if the US doesn’t see a technical downturn, growth will still be the slowest in over two decades. And this isn’t just a developed market story: emerging markets – which generally moved earlier to tighten monetary policy to combat inflation – will also see a further slowdown. China’s recovery will prove a challenge in the face of limited stimulus and a shift in global spending patterns, though India is expected to outperform on the back of looser fiscal policy. Our Global Economics team, which is led by Jennifer McKeown, provides insight into how inflation dynamics are set to play out, highlighting the good news of a peak in headline rates but also the threat of persistent underlying price pressures. While that means the most aggressive monetary tightening cycle in decades is set to run on, this new report also explains which central banks are most likely to start to unwind some of their rate hikes as the growth environment cools. You can find out which central banks will be at the head of the easing pack – and when cuts are likely to start – along with all our latest global economic insight and forecasts by downloading our Q3 Global Economic Outlook.