The outlook for the euro-zone has darkened considerably since the start of this year. In January, amid the rapid rise of Omicron infections, the forecast had been for sub-trend growth – but growth nonetheless – and falling headline inflation, even if core inflation was expected to remain above target. Seven months later, our Europe team now thinks a mild recession is on the cards as real household incomes are hit by the surge in inflation and business confidence has collapsed. The team explains in their latest quarterly Economic Outlook report that growth will be much weaker than the consensus or the European Central Bank expect (see chart). 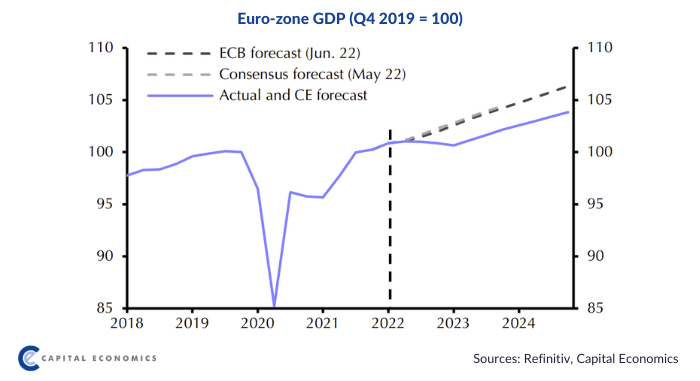 At the heart of Europe’s current woes is a massive terms of trade shock which has seen Germany record its first goods trade deficit since 1991. Russia’s invasion of Ukraine in late February has exposed dangerous vulnerabilities in the euro-zone, and our Europe team warns that it faces an even darker economic future if the Kremlin makes good on threats to cut off gas supplies completely. While the extraordinary complexities of the current economic and geopolitical environment are taxing central banks worldwide, the ECB faces the additional challenge of convincing markets of its credibility in keeping the currency union whole. Learn how the ECB will manage this formidable task, and find out more about our macroeconomic views and forecasts for the whole euro-zone, as well as country-by-country insight, in our latest Quarterly Outlook.